Glamour is not something we associate with travelling nowadays, with shrinking legroom, tight security, baggage restrictions and the ingenious ways by which airlines (especially budget ones) routinely fleece their customers. However, that wasn’t the case as during the early decades of the twentieth century, long before air travel became a reality, travelling by sea was the only way to cross continents and travel lengthy distances. The great liners of the day with names such as Olympic, Mauretania, Normandie, Queen Mary, Queen Elizabeth and the United States plied the world’s oceans and became a byword not just for technological prowess but also for glamour and beauty.

Organised with co-operation from the Peabody Essex Museum, the V&A’s Ocean Liners: Speed and Style is the first exhibition to provide a comprehensive exploration of these “floating palaces” and operates on three levels: first it looks at the glitz and allure of travelling aboard a liner. As one enters the exhibition space, the visitor is treated to a recreation of that glamorous world where the interiors are as luxurious and lavish as any great palace or hotel as manifested by doors and panels from the SS France, the panel which adorned the grand staircase of the RMS Olympic as well as the furniture and panels from the RMS Queen Mary and the SS Normandie. Customer service was also paramount as the liners ensured that not only did their visitors travel in comfort and style, but every need and whim was anticipated;  for example. the Queen Mary having a room that could convert into a Roman Catholic chapel and a door that doubled as a menorah for use by Jewish passengers for Sabbath services.

Nowhere is the glamour of ocean travel shown more clearly than in the “life on board” section where the displays are meant to evoke the travelling experience for first class passengers. Ocean liners emulated grand hotels not only in terms of interiors but also in terms of food and service with top chefs acting as consultants. The entire on board experience was deliberately designed to replicate how the rich and powerful lived on dry land to make travelling as appealing and convenient as possible.  There were also activities on board such as sports and games for young and old alike but the main highlight is the fashion featured – a Christian Dior suit belonging to the actress Marlene Dietrich as well as a small selection of gowns worn by socialite Eleanor Grigsby as well the luggage in which their clothes were packed – dressing cases full of cosmetic bottles and Vuitton trunks that covert into chests of drawers – no slinging a soft bag into the overhead locker for these travellers. These clothes emphasised how much being on board was also to be seen and nowhere is this more apparent with the recreation of the “grande descente” where female passengers wearing their best gowns and jewels would descend the grand staircase of a liner on their way to dinner. 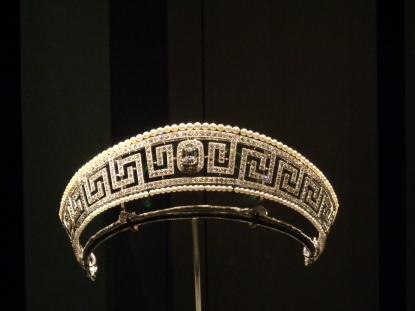 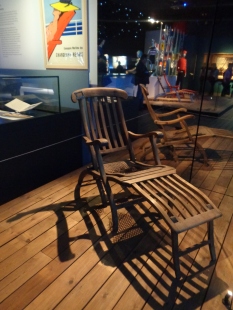 Secondly, the exhibition also takes a look at how technology has transformed how people travelled by sea. From its beginnings via Isambard Kingdom Brunel’s Great Eastern, ocean liners were initially used to transport mail and cargo gradually extending to transporting people especially those who were emigrating for a better life. However it was not a pleasant experience and as the nineteenth century gradually grew to a close, advances in ship building and technology made it possible for travelling by liner to be glamorous and aspirational rather than dirty and dangerous. Models and illustrations from the period demonstrate how much attention was paid to the design of the ship and its engines not only to make the liner look aesthetically pleasing but to ensure that safety, comfort and speed were not compromised.

Speed also comes in to what I consider the most important aspect explored by the exhibition – how ocean liners were used as tools to promote nationalism, national identity and national pride. The Blue Riband which was awarded for the fastest crossing of the Atlantic became fiercely contested and it was understandable that Kaiser Wilhelm II of Germany would be exulting over German liners wresting the Blue Riband from their British rivals in 1898 and holding on to it until 1903. In a way, the competition for the coveted Blue Riband reflected the growing Anglo-German naval rivalry during this period as well as Germany’s dream of possessing a powerful navy to ensure its “place in the sun.” Nowhere is this ambition more apparent in a painted panel that was part of the Kronpriz Wilhelm’s interior which depicted allegorical images of the sea and rather unsubtly pointed out that Germany’s future lay with its mastery of maritime power.

Increasingly as well, the state was taking an active interest in the liners and what they could achieve for the nation. This was especially true as during the late nineteenth and early twentieth centuries, liners were increasingly being built with government subsidies on the understanding that they would be requisitioned for public use in the event of war or any national calamity as was the case during the two World Wars where the likes of the Mauretania, Britannic and Queen Mary were used either as hospital ships or to transport troops and supplies to the front.

National identity and national pride were also heavily invoked especially during the 1930s. As demonstrated by two rival liners – the Queen Mary and the Normandie, which were seen by their respective governments as a way to promote Britain and France. Queen Mary, the first of the liners built by the merged Cunard-White Star Line drew heavily on a more restrained style in keeping up with the British national character to give prospective passengers a feel of being in a stately home at sea. Its interiors, fixtures and furniture made from materials sourced not only from all over Britain but also from its empire as a way of showing that the colonies were not a financial drain on the state but rather an important source for raw materials, and that the empire was of mutual benefit economically for the mother country and its dependents. 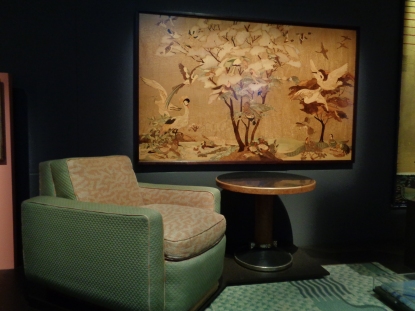 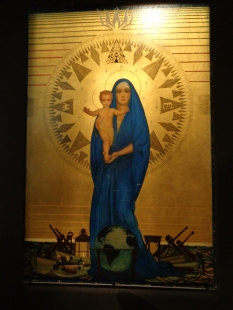 The Normandie on the other hand was unashamedly Art Deco in style and reflected continuing French influence in Western art and design by commissioning panels, sculptures and interior decoration from leading French artists. It was also a perfect showcase for the best of French industry as the likes of Lalique, Aubusson and other leading companies provided the liner’s furniture and fixtures. Both liners could be seen as floating representations of their respective countries at sea. 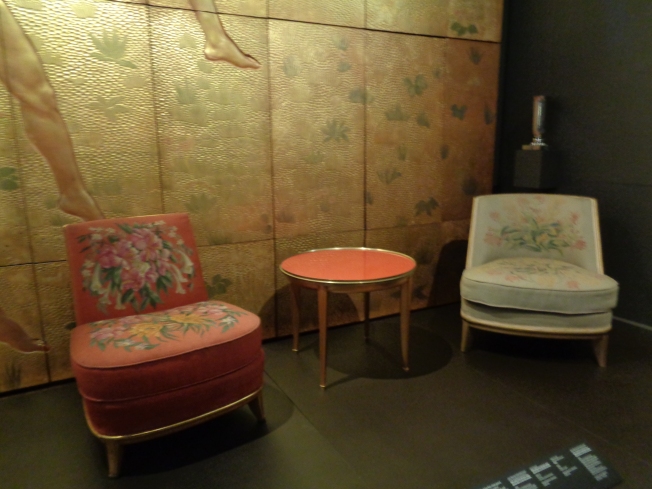 The Second World War put an end to the golden age of the ocean liner and the advent of airplanes such as the Boeing 747 and the Concorde rendered long distance travel by sea redundant. But the liners still provide inspiration for romance, dystopia and nostalgia as demonstrated by films such as The Poseidon Adventure (1972) and Titanic (1997). In addition, the liners themselves were a potent symbol for optimism in scientific and technological progress.

The exhibition is not without its weakness; more could have been said about those travelling in second and third class as well as the staff that saw to the needs of the passengers. But that’s a small quibble, the V&A has managed to give its visitors a slice of that glamorous life at sea that has passed into the annals of history and one that we will never see again.